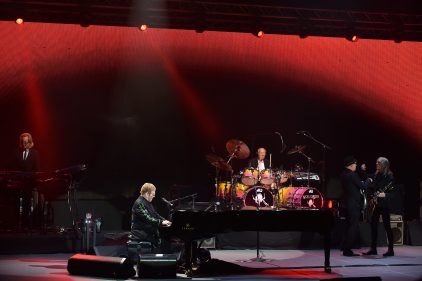 With over 250 million albums sold and 5 Grammy Awards, Sir Elton John is one of the most popular, acclaimed and prolific artists of all time. As part of his Wonderful Crazy Night tour, this living legend will be performing in Beirut

with his full band–a best-of selection of his outstanding repertoire, including the iconic “Your Song”, “Rocket Man”, “Candle in the Wind”, “I’m Still Standing”, to name but a few. Get ready for the biggest music event of 2017!

Sir Elton John and his band comes to Forum de Beyrouth– within Byblos International Festival on Sunday December 10, 2017 as part of his international “Wonderful Crazy Night” Tour.
The show will feature iconic hits and classic album tracks from throughout his incredible five-decade career, including a selection of songs from his 33rd studio album, Wonderful Crazy Night. Combined with his four live albums, five film soundtracks, and over a dozen compilations, this makes him one of popular music’s most prolific recording artists.

The Elton John band features Nigel Olsson on drums, part of Elton’s original three-piece band, as well as musical director Davey Johnstone (who first recorded with Elton in 1971 and joined the band full-time a year later) on guitar, Matt Bissonette on bass, John Mahon on percussion, and Kim Bullard on keyboards.

Undeniably one of the most acclaimed and adored artists of all time, Elton’s spectacular stage shows are sought after by audiences worldwide. Elton has over 4,000 performances, in more than 80 countries, to his credit since launching his first tour in 1970.
Elton is one of the top-selling solo artists of all time, with 38 gold and 31 platinum or multi-platinum albums, as well as 58 Billboard Top 40 singles in the United States, and he has sold more than 250 million records worldwide. Elton holds the record for the biggest-selling single of all time, Candle in the Wind 1997, which sold 33 million copies, as well as for most appearances on Billboard’s Adult Contemporary chart, with his most recent single A Good Heart (from Wonderful Crazy Night) marking his 72nd entry.

He has also written the music for stage and screen successes Billy Elliot: The Musical, Elton John and Tim Rice’s Aida, and The Lion King, which was named the highest-grossing stage show or film release in the world.
Among the many awards and honors bestowed upon him are five Grammys, a Grammy Legend award, a Tony and an Oscar, a Best British Male Artist BRIT Award, induction into the Rock and Roll Hall of Fame and the Songwriters Hall of Fame, the Kennedy Center Honor, Legend of Live Award, 12 Ivor Novello Awards and a knighthood from HM Queen Elizabeth II for “services to music and charitable services.” In 2013 Elton became the first recipient of the BRITs Icon Award, which recognizes the very highest level of British music achievement, presented only to iconic artists whose writing, recording and performances set them apart as having made a lasting impact on the nation’s culture.